Rowley Village and Rowley Regis - A work in progress.

One of the last remaining historical buildings in Rowley village is the Providence chapel at Bell End. Nowadays, as well as still being in operation as a place of worship, it is the home of The  Christian Heritage Exhibition. Why not visit the exhibition and the booksale which will be held on Friday 18th June 2021 and Saturday the 19th, see the poster below for details. 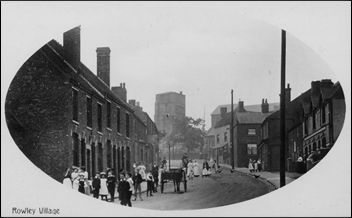 At the top of Rowley Hill sits St Giles Church, there has been a church on this site since the 12th century but the present building is by no means an ancient monument, there have been 4 churches on this site which may be unique in all England, the first church survived until the 19th century when it was replaced thanks to the efforts of the Rev George Barrs, Rowleys most famous incumbent who left a journal describing the life and conditions endured by him and his paishioners. The second church which he never lived to see survived only 64 years and had to be demolished due to mining subsidence, the third church was burnt down reputedly by Suffragettes as part of their Arson Campaign in 1913, the fourth church which survives today was completed in 1923. It is evident from the church yard and the wall surrounding it that an older building once stood on the spot and parts of the 3rd church can be seen in the present building, if you look close enough you can see traces of the fire in the bricks. Inside the gates at the top of Hawes Lane where the main entrance to the church is there are (very) old stones which are possibly from the first church, also the wall at this point is made from hand dressed Rowley Rag, we know tht the original tower and parts of the church were made from this stone so it is possible some of this was recycled  into the wall when the church was rebuilt. 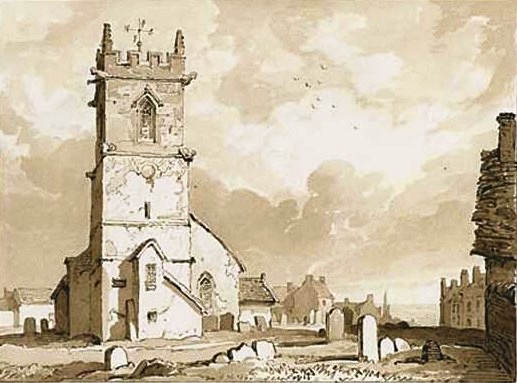 Around the church until the 1970s there was Rowley Village again a settlement from ancient times and "capital" of Rowley Regis a Royal and ancient Manor pre Domesday, None of the old buildings now survive apart from the Robert Peel, once  the village gaol and the Bulls Head which are situated at either end of the village. The buildings in between were demolished by Sandwell Council due to a road widening scheme which never happened or supposed subsidence which is denied by past residents.Modern housing now replaces the old buildings. The village boasted Rowley Hall again an ancient structure which was used as a hiding place by members of the Gunpowder Plot when they fled after the failure. At the time of the industrial revolution Rowley Village carried on the ancient trade of nail making amongst the farming and was once a large  scale producer of the Jews Harp but as the village stood astride the 30 foot seam, a vast coalfield, it and the surrounding area soon fell foul of its legacy all but destroying the rural past. 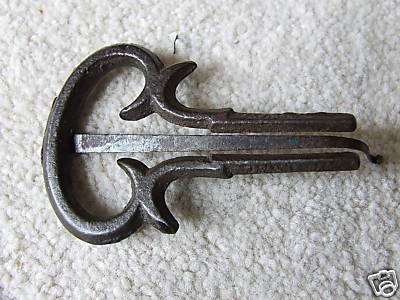 The architecture of the village belonged to many eras, ranging from Rowley Hall a Victorian gentleman’s residence with 16th century outbuildings and retainers cottages in Spring Row,, old farm houses or ex farm houses converted to Inns such as The Grange, The Robert Peel and the Britannia, and a Victorian vicarage next to the church standing in its own grounds accessed through a long driveway.  Even at the time of demolition in the 1970s there were small workers cottages with Nail makers outhouses as in Church Row,at least one 17th Century building with windows bricked up to avoid the window tax, a rag-stone arch connecting two adjoining buildings at the top of the village, purpose built pubs such as the Kings Head, stone cottages in Hawes Lane and Siviters Lane, one boasting the date 1603, Victorian chapels at Bell End and Hawes Lane, terraced Villa’s, substantial houses in Siviters Lane, two post offices one in Hawes Lane the other in the village, various shops selling drapery, household goods, foodstuffs and coal and an old Church School  at the top of the village opposite the church. 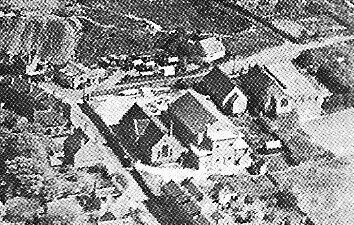 Today only the Robert Peel and the Britannia still exist with a couple of terraced houses containing the village chippy,and a few old houses and the Baptist church and manse at Bell End. In between there is modern housing, ranging from the 1930 to the present. The Post Office has gone, victim of recent cuts, there is a convenience store at Bell End and a chemist next to the Doctors surgery in the middle of the village. A new super school restoring the village link with education has been built at near the top of the village off  Curral row and the green, opening in 2011, and the Bulls Head and the Cock are still on the edge of the village past Hawes Lane. Finally  at the top of the village high on Rowley Hill, stands St Giles, rebuilt after the famous fire, but with the ancient grave yard still standing as a monument to Rowley’s ancient past. Many photos from Rowley past to the present day can be seen in our photos section together with maps of the village. 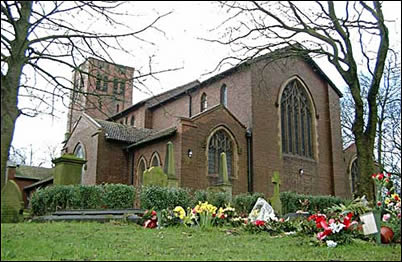 Rowley Village was surrounded by fields and overlooked by the rest of the Green Rowley Hills and the gigantic Hailstone which stood at the summit of Hailstone Hill, a wonder that people travelled many miles to admire. The views from the Rowley Hills today are magnificent and on a clear day stretch as far as the Black Mountains of Wales. 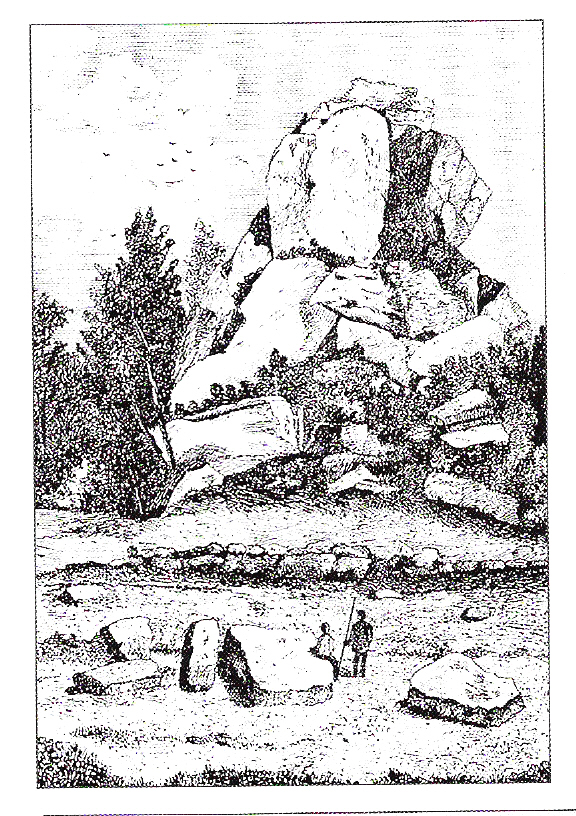 Unfortunately most of this green aspect no longer exists although you can still see traces of country side on the Rowley Hills around Turners Hill and medeival farm land atWarrens Hall  and a carefull look will see remains of stone walls assembled from the world famous Rowley Rag which is still quarried there. There is the recently renovated 16th Century farm on Portway Hill, or Darbys Hill as it was once known, surrounded by fields and  its not too difficult to imagine what it once was like. Past residents still see the village in their imagination and it is the purpose of this web site to recreate it for nostalgia or posterity or the sheer pleasure of the memory. We need to collect facts pre 1970 about Rowley Village itself as this subject has been sadly neglected if you have any facts/memories of people places, buildings etc., from any era before 1970 when the old buildings were demolished,they will be greatly appreciated and we can add them to the website. Please E mail them to the administator at [email protected].

We also have access to some records of Rowley Regis and welcome any queries on people, places, events etc. If we cant answer the question we will post it on the web site for others to answer. 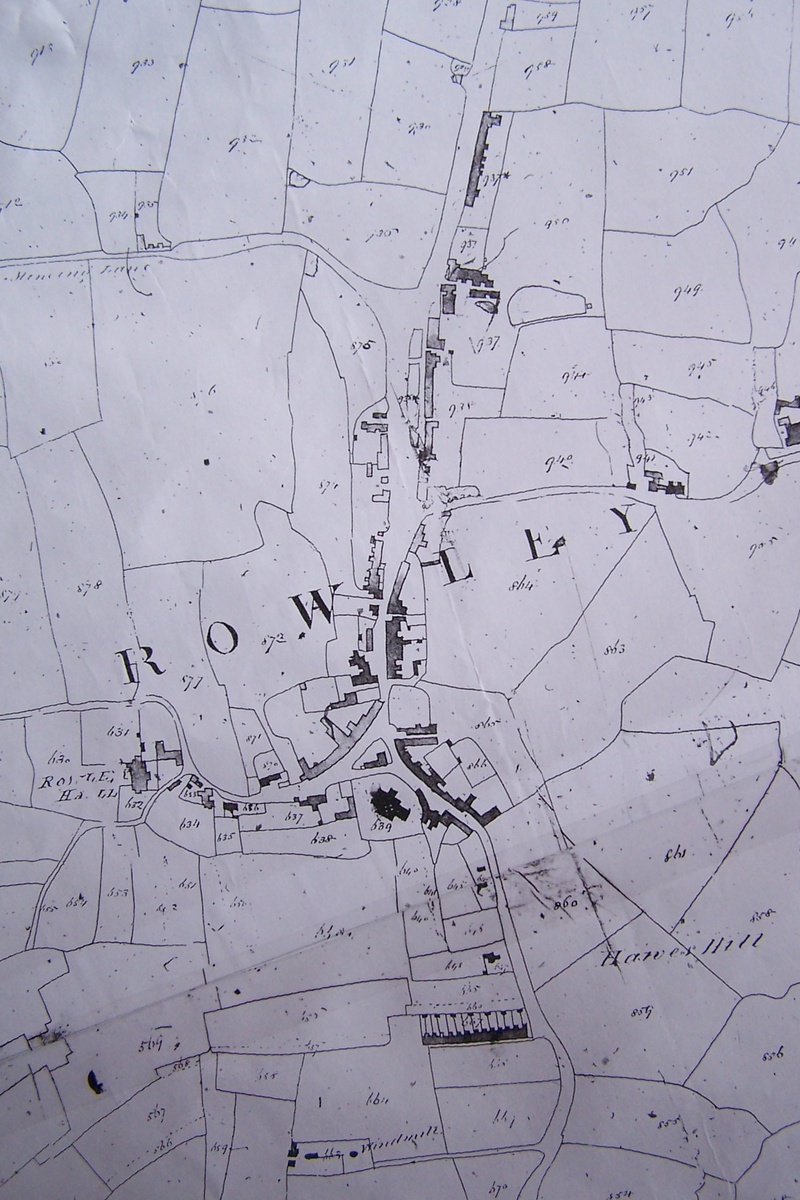 All the Rowley Churches

The First Church Circa 1199 to 1840 The First Church of Rowley.
One cannot be certain of the date of the first church but it has been assumed by William Crump {vicar 1855} and Francis Cheverton (Vicar in 1923) to have been erected between 1199 and 1216 in the reighn of King John. It is described by Hackwood in a publication about 1920 as "the church of Rowley Regis, perched on the summit of the hills, is a landmark for miles around. Not only is it the most prominent feature of the landscape, but it is the core and centre of the place's historical associations".
It was built during a perio 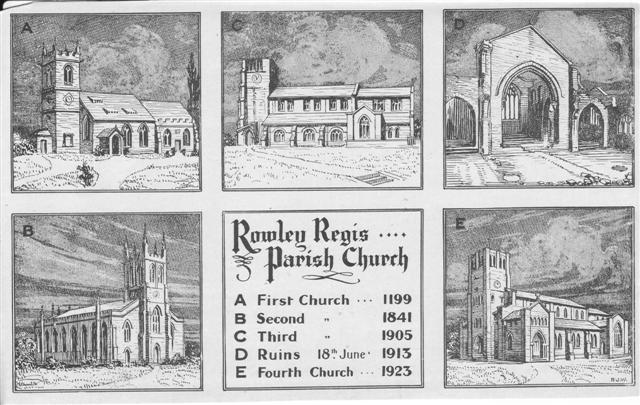 The boundary of Rowley Regis

The borders of Rowley Regis have existed virtually unchanged as an administrative unit since at least Domesday, the Manor and later the parish and now the township form an elongated strip of what was south Staffordshire protruding into Worcestershire and bordered by Tipton to the north, Oldbury to the east, Halesowen to the south and Quarry Bank, Netherton and Dudley to the west. All parts of the parish can be seen from the magnificent vantage point of the Rowley Hills. The “capital” of Rowley Regis was obviously Rowley village until superseded by the likes of Blackheath at the industrial revolution. The rest of the Manor/parish was made up of  scattered hamlets which included The Brades, Tividale,Oakham,Knowle, Tipperty Green,Whiteheath Gate,Windmill End,Hades, Reddal Hill,Corngreaves,Hayseech and Gorsty Hill.

If we were to follow the borders of Rowley Regis in today’s terms we would perhaps start at Cradley Forge by the Woodman pub at the bottom of Quarry bank, following Mousesweet brook thru the nature reserve of the same name, Newtown lane, Brook Lane. Cut thru Halesowen Rd at Bluebell Rd and Gawne Lane at the bridge by Bramble Close on to Bumble Hole via Cobbs engine house, thru the Dudley Rd at Banklands Rd and up over Warrens Hall Park and the Rowley Hills cutting the Oakham Rd near Tansley Hill Rd. Over and down to the Wolverhampton Rd @ Hill Rd and on to Groveland. The boundary then turns right to Brades village and follows the line of an ancient brook  at the rear of Oldbury Rd thru Pencricket and Whiteheath cutting Blackheath at the Market place then following the Halesowen Rd to Gorsty Hill and Lodgefield Rd to Halesowen/Haden Hill Rd near The Crescent, it then follows the River Stour via the Gunbarrel works, Bellvale, Overend Rd, thru Cradley Rd at Bridge Street and on, once again to Cradley Forge. 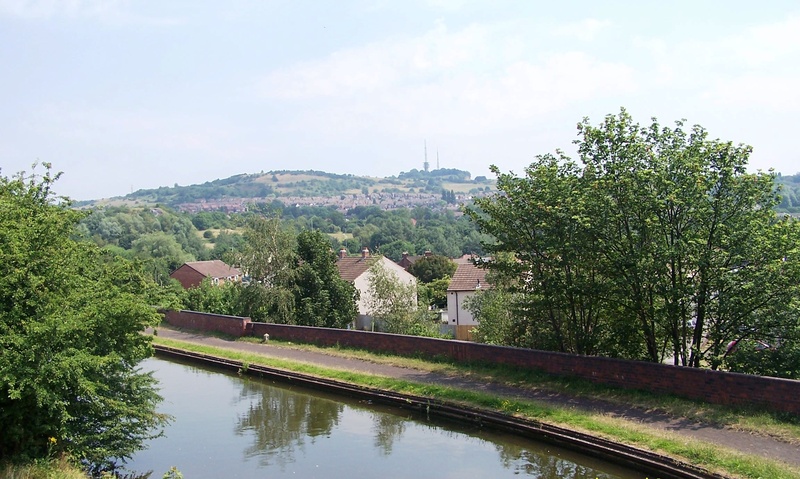 Ode to the Rowley Hills

I’ve stood, and gazed upon the scne,

of rushing streams and sparkling rills,

of shady woods and meadows green.

and oft upon some jutting peak,

I’ve watched the vessels scudding by,

and heard the seagull’s plaintive shriek,

But still I love the Rowley Hills,

to rest upon their verdant brow,

and starts to work the spade and plough.

I cannot stand upon their heights,

and view the ever rolling sea,

but every where my eye alights,

recalls some memory sweet to me.

and when the lark his song shall raise,

at early dawn in grateful trills,

I’ll join with his humble praise,

to him who gave us Rowley Hills.

“Ode to Rowley Hills” by James Whitehouse of Oldbury Circa 1900

We have recently been sent, by a relative of the author, a copy of the following original poem by James Moore of Rowley who at the time of writing in 1952 was a Rowley Regis councillor, according to his relative he always said it was inspired  by Houseman's “On Wenlock Edge.” It is a very fine poem and  it sums up our feelings when we think of what has happened to Rowley and the way the once beautiful country side has been ruined. When you look at Clent or Walton Hill, from the Rowley Hills, you think what might have been, had not the 30 ft coal seam and the Rowley basalt not run under the Rowley Hills. Our thanks go to the contributor for permission to publish the poem.